The Titanic was built by the White Star Line. The owners of the company thought that if ocean liners were big and luxurious enough more people would travel with them.

The Titanic was designed to be the largest in a series of three ships made by the White Star line. It was 268 metres long, 28 metres wide, and weighed 45 000 tons. It produced enough power to travel at a speed of 24 knots (about 40km per hour).

The bulk of the ship was divided into compartments. They were separated by steel doors that did not let any water through. The ship could still move and float if 3 or 4 of the 16 compartments were filled with water.

The Titanic was more like a floating hotel than a ship. It cost $7.5 million and it was unlike any other ship that had ever been built. Palm trees and other expensive plants decorated the luxurious hallways andcorridors. The ship could carry 2 600 passengers and a crew of 900. 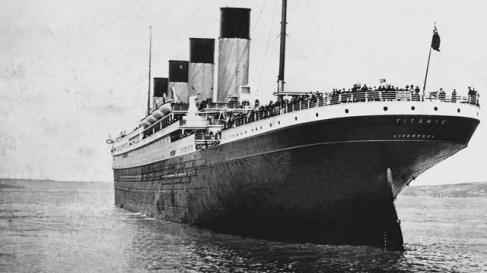 Although the ship’s owners said the Titanic was unsinkable many problems before the first voyage were overlooked. Safety regulations at that time were not very strict. The ship only had 16 life boats, enough for about 1 500 passengers. It was only tested for a few hours and never went at full speed. The telegraph system on board was new and not many people knew how to operate it.

During the night of April 14, 1912 the waters of the North Atlantic had a temperature of about -2° C. At noon on that day the radio operators got messages from other ships about icebergs that were nearby. The Titanic’s captain, Edward Smith, did not care about these warnings. He was captain of a steel giant that could not sink. The only thing he cared about was setting up a new world speed record. The Titanic was to be the fastest ship that ever sailed from Southampton to New York.

The night was clear and the Titanic sped on. When a big iceberg was sighted the first officer shut downall the engines. But it would have taken the ship about half a mile to come to a full stop. Even though, on the surface, the ship stayed clear of the iceberg, it ripped a big hole in the hull. At once thecompartments began to flood with cold, icy water. The bulkheads were lowered but it was too late. Waterflooded at least five compartments. 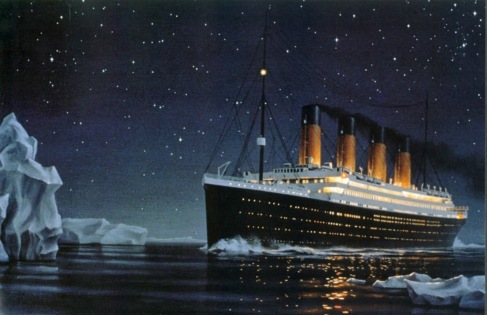 The collision with the iceberg was so slight that the passengers hardly heard it. Most of them didn’t take anynotice and continued dancing and having fun. Some passengers were asleep in their cabins.

The bow of the ship dipped under the water’s surface and the back part of the ship began to rise. After a short time the Titanic broke into two pieces. When Captain Smith realized that the Titanic was sinking he had a distress signal out but the nearest ship was a hundred kilometres away.

As time went on chaos emerged and passengers rushed to the boat deck. Women and children were allowed on the lifeboats first. Lights flickered and electricity was finally gone. At 2:20 a.m. the Titanic disappeared into the Atlantic Ocean.

The Carpathia, which was the nearest ship, came to the scene about two hours later and picked up the freezing passengers in their lifeboats. By early morning the news of the disaster had gone around the world. The world’s largest ocean liner, the Titanic, had sunk on its maiden voyage, killing 1513 people.